"Mary Kathleen Hawley has accomplished something in Double Tongues that is as rare a find as an agate on the beach. She has given us "just enough." Her language is spare, direct and potent, allowing the strong descriptive core of each poem to gather weightier issues around it..."

"Her writing is more than lyrical; it is completely musical—filled with rhythms and dynamics that capture the reader like a good Coltrain album." 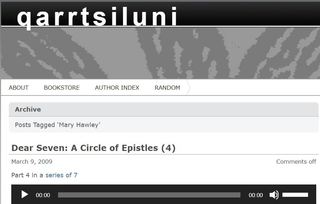 From the back cover: This bilingual anthology presents the work of twenty-one poets in Chicago's thriving literary community whose cultural and linguistic heritages are rooted in Latin America and Spain. The poems collected here are dazzling and unpredictable, forming an iridescent mosaic that transcends language, borders, and boundaries. Edited by Olivia Maciel, with translations by Mary K. Hawley, Gloria Dávila, Joel Felix, Olivia Maciel, and Manolo Rider-Sánchez.